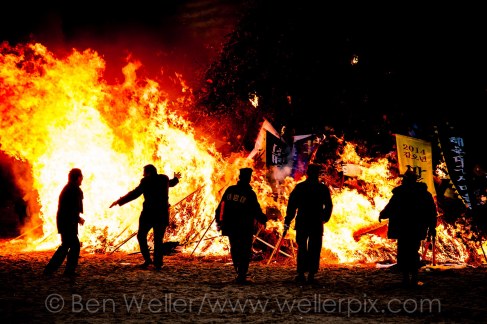 Daeboreum is the Korean celebration of the first full moon of the Lunar New Year. Burning grass along rice fields served to ward off pests and fertilize the fields. The tradition continued with urbanization, and now, during Daeboruem, large bonfires blaze throughout the country, even in the cities. Below are photographs from the Daeboreum celebration at Haeundae Beach in Busan, February 15, 2014. 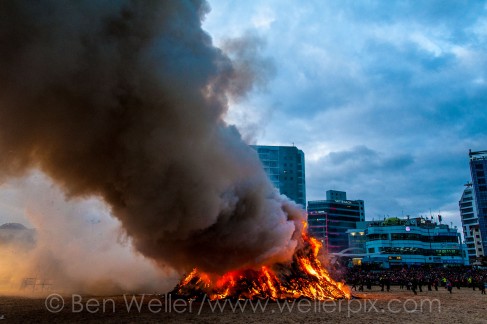 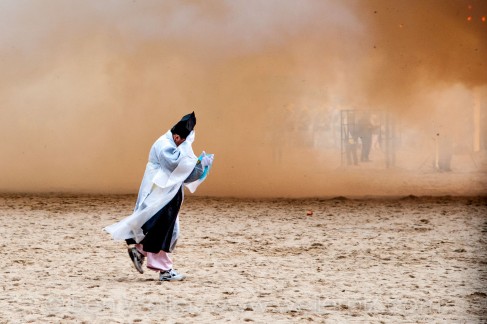 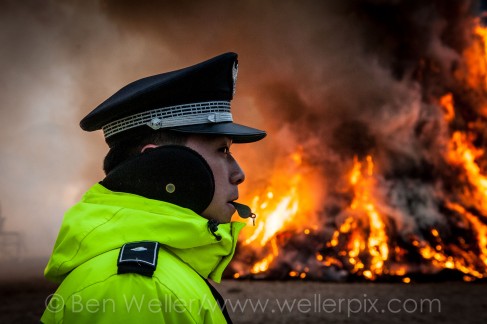 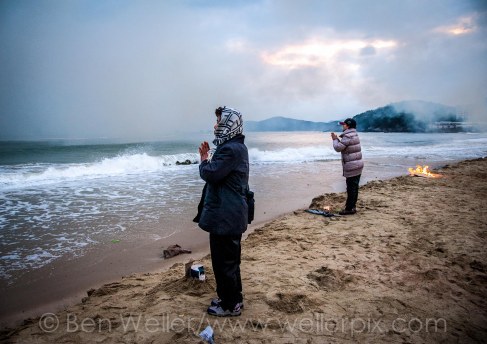 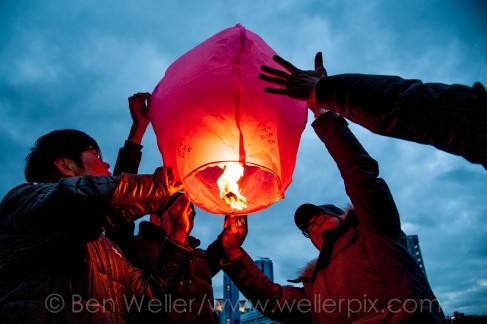 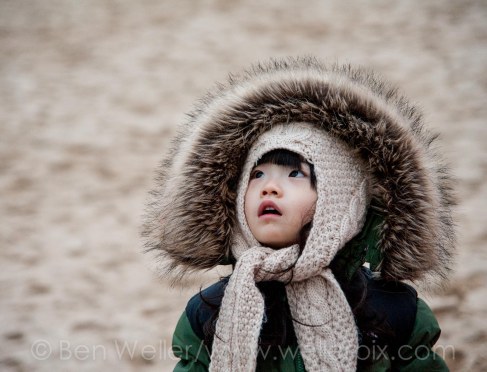 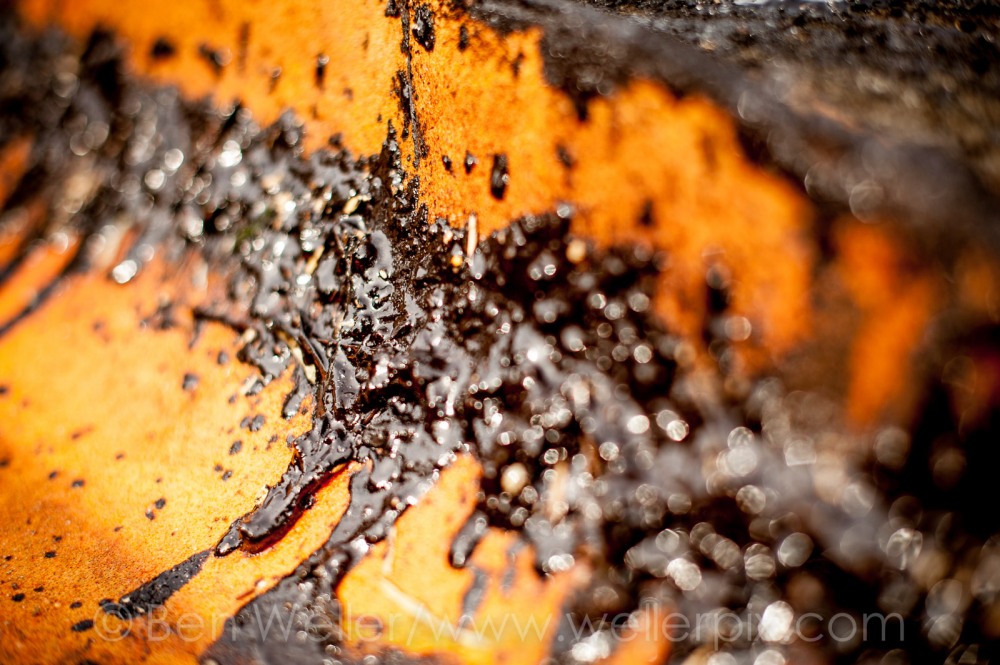 The oil started spilling into the mouth of Gwangyang Port around 9:30 a.m. on Friday, January 31, 2014. A Singapore-registered vessel, piloted by a port captain and exceeding speed limits, ran into pipelines at a GS Caltex petrochemical facility, damaging the pipelines and dumping 164 tons of oil into the coastal waters off Yeosu. 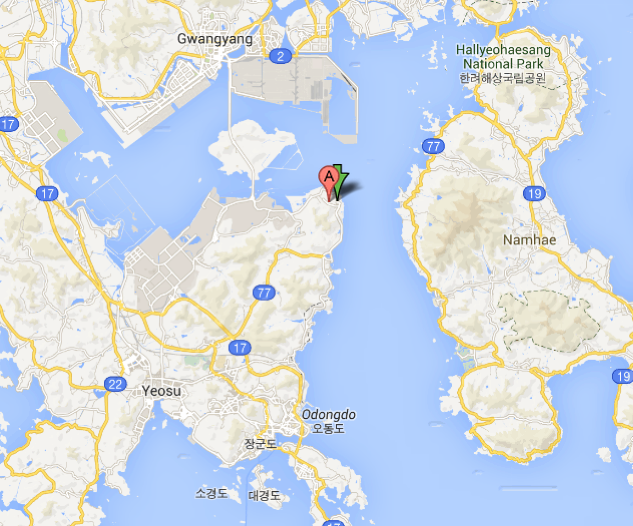 A map of Yeosu, with the accident location marked. Map via Google Maps.

The spill couldn’t have come in a worse or more predictable spot. Yeosu City and the Gwangyang Port are home to one of the world’s largest industrial complexes–a labyrinthine landscape of pipelines, cooling towers, steel plants, and shipping terminals. The area is also home to fisheries, fish farms, and marine wildlife sanctuaries. Many of Yeosu’s residents’ livelihoods depend on tourism and the seafood trade. As the oil spread on Friday and over the Lunar New Year weekend, it was clear that the spill would have far-reaching consequences. 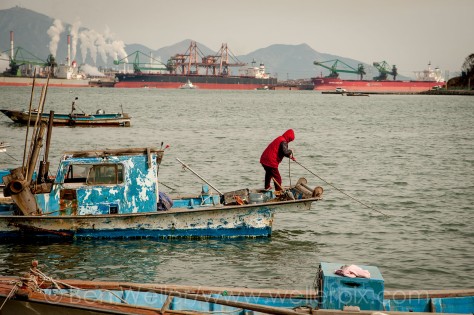 A woman works on her fishing boat in Gwangyang Port, near the site of a major oil spill. 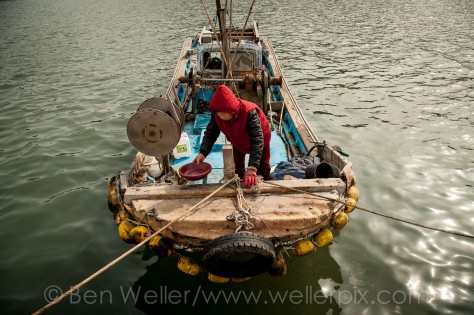 One of the first areas affected was Shindeok-dong, a small fishing village about 2km south of the spill. Shindeok is a small collection of concrete homes nestled together on the eastern shore of Yeosu. Small piers and fishing boats dot its shoreline. The cleanup effort, which involved the Coast Guard, Army, national police, the Red Cross, GS Caltex, and the Korea Marine Environment Management Corporation (KOEM), as well as hundreds of volunteers, began there, and would spread along with the oil in the coming days. 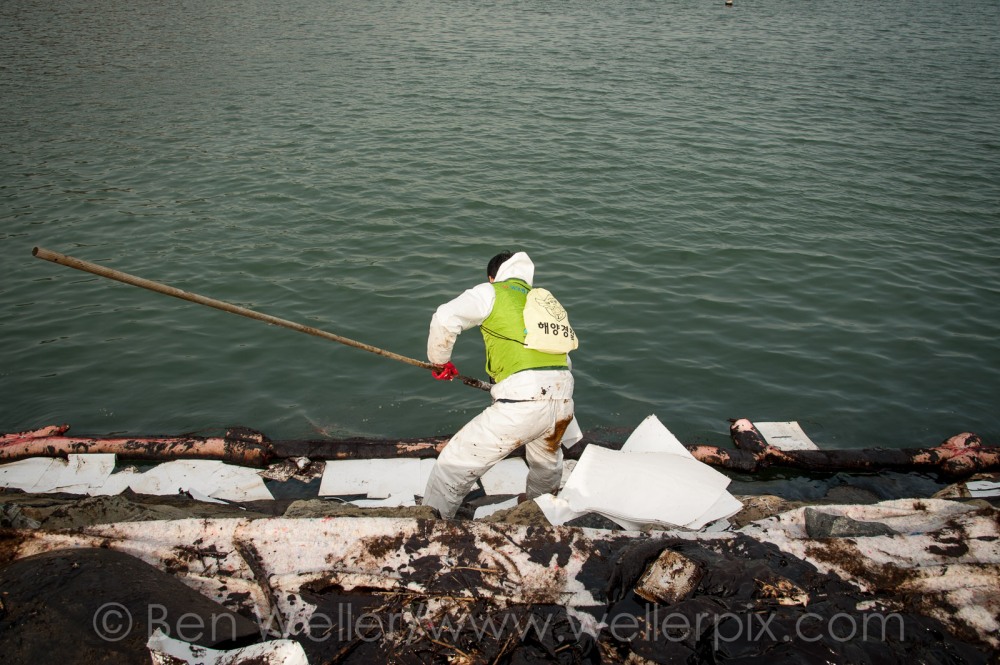 A volunteer collects oil-contaminated debris from the shoreline. 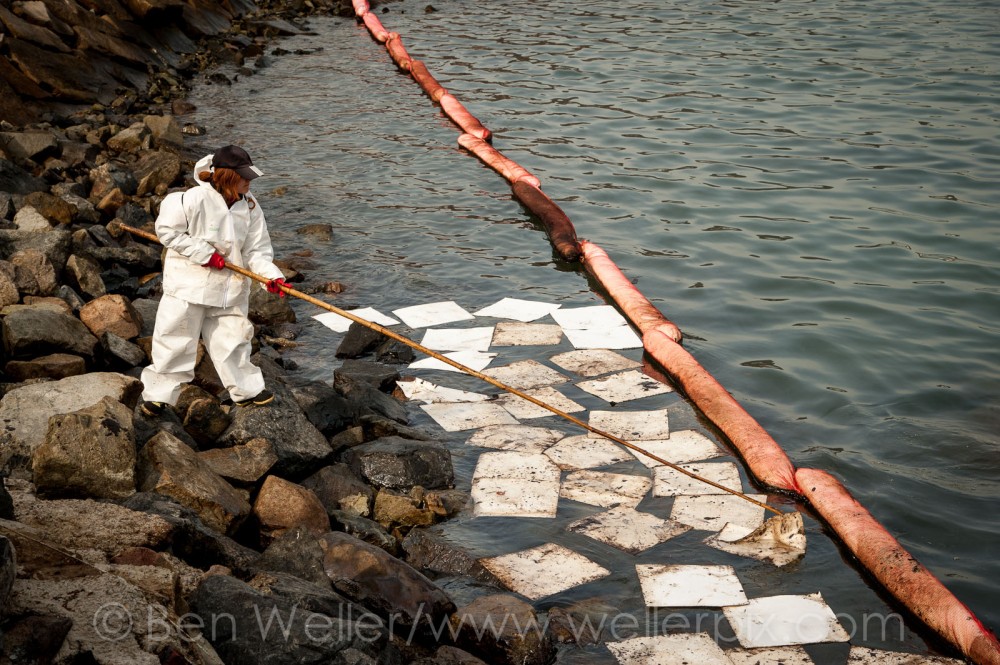 A woman uses oil absorbent mats to soak up oil along the shore of Shindeok Village. 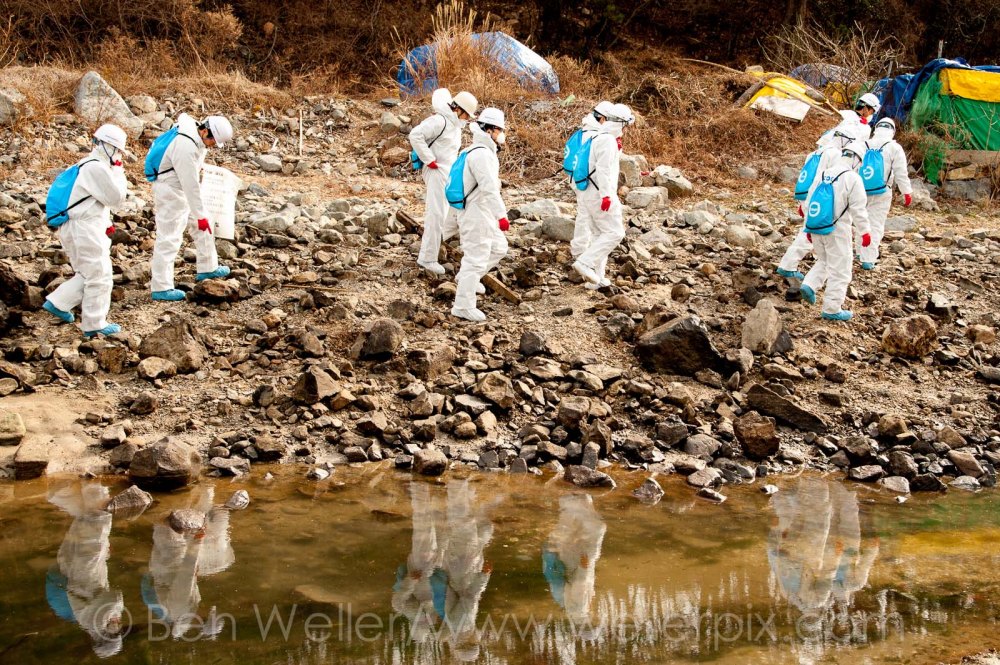 Volunteers and officials look for oil contamination along the shore in Shindeok Village. 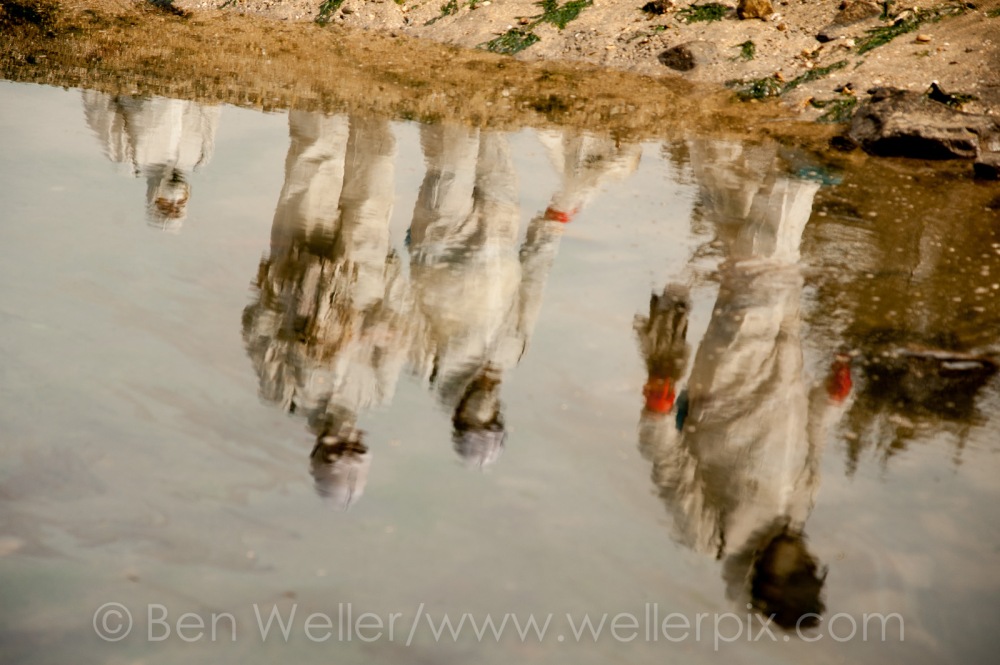 Cleanup workers are reflected in contaminated water near Shindeok Village. 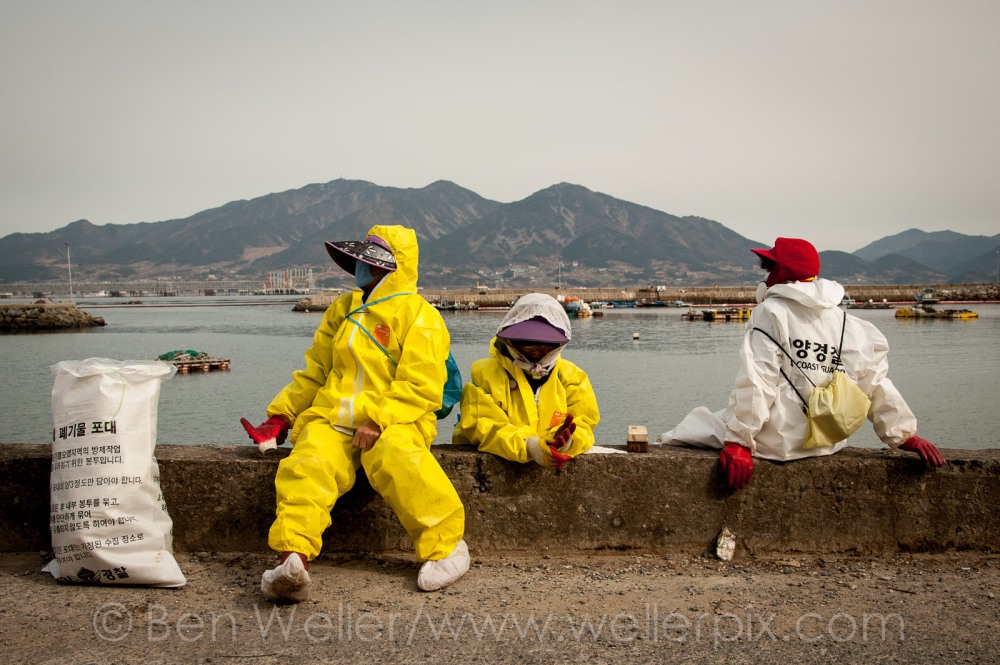 Local resident volunteers at the site of cleanup efforts in Shindeok.

Oil spill cleanup is a painstaking process, and the effects of most spills are often not known for years. Yeosu had already seen a major spill in 1995, which, as the Korea Herald reports:

“resulted in some 5,000 tons of oil contaminating its coastline. It took five months to clean up the spill and the damage was estimated at 150 billion won ($140 million), according to reports.” 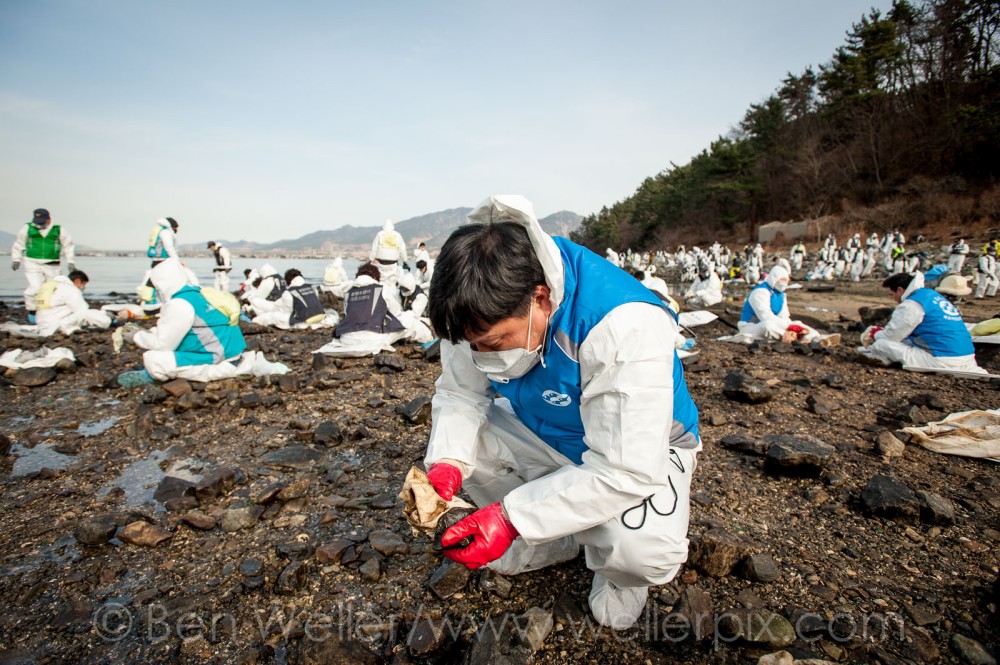 Volunteers clean rocks by hand along the shore of Shindeok Village. 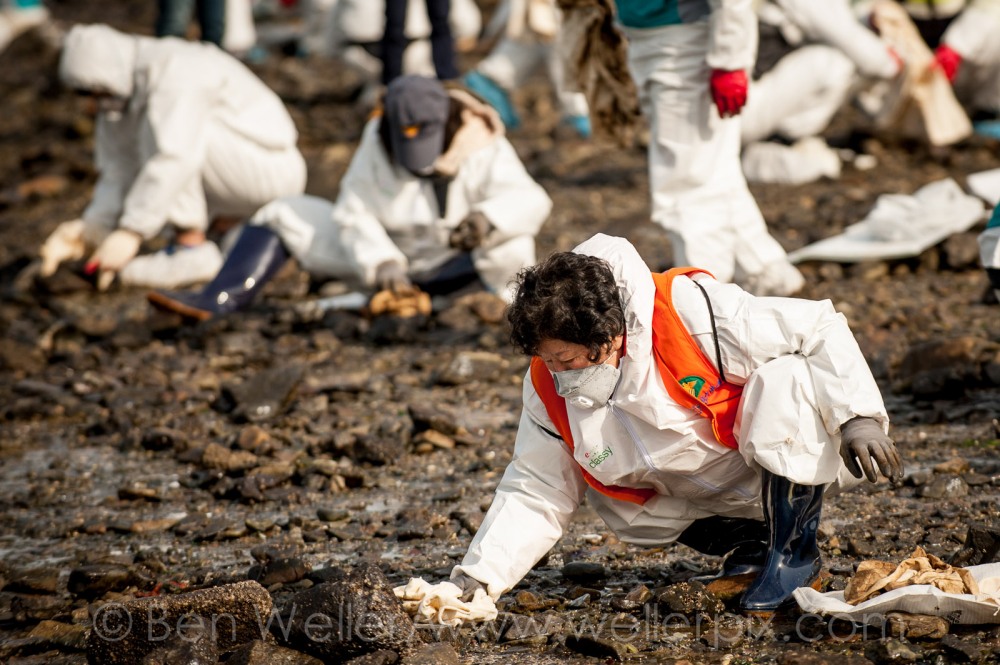 Volunteers clean rocks by hand along the shore of Shindeok Village.

Shindeok was not the only area affected by this most recent spill. I traveled around the area with staff and volunteers from the Korea Federation for Environmental Movements, a national NGO, and we witnessed oil contamination well into Gwangyang Port and as far south as Udu-ri, and oil has been reported to the east, along the shores of Nam-hae. 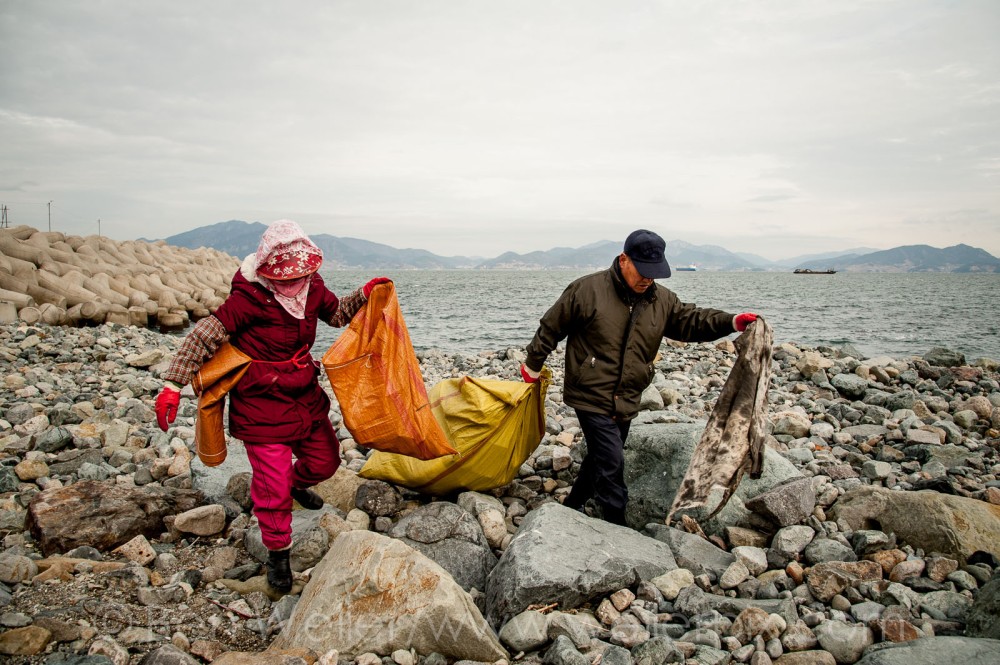 A resident couple collects trash and oil-contaminated debris along the coast near Manseong-ri, a popular beach in Yeosu. 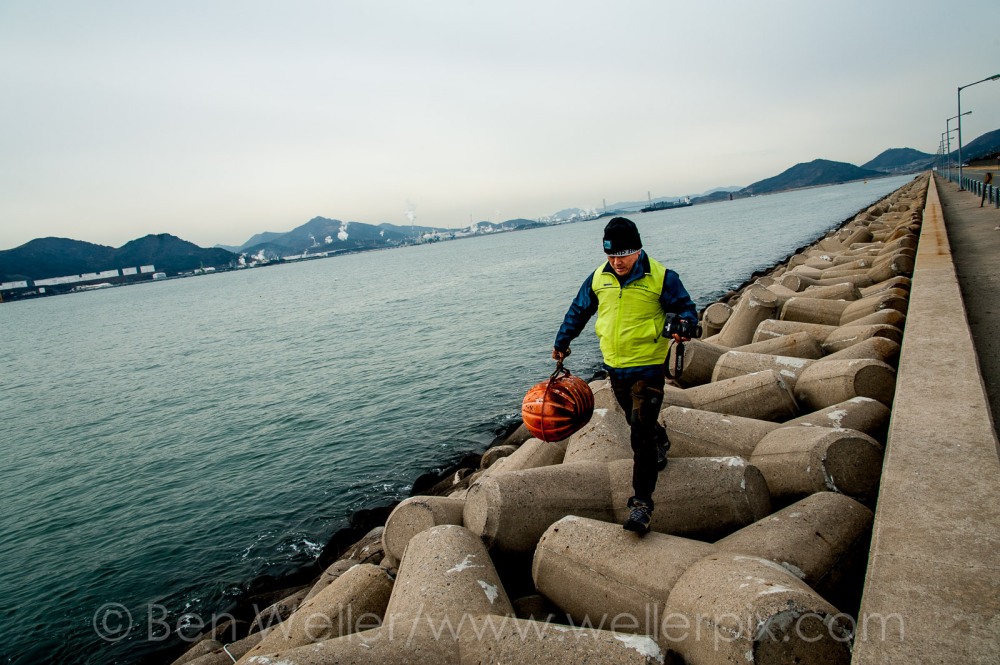 A volunteer from the Korea Federation for Environmental Movements collected contaminated debris along the coast of Yeosu. 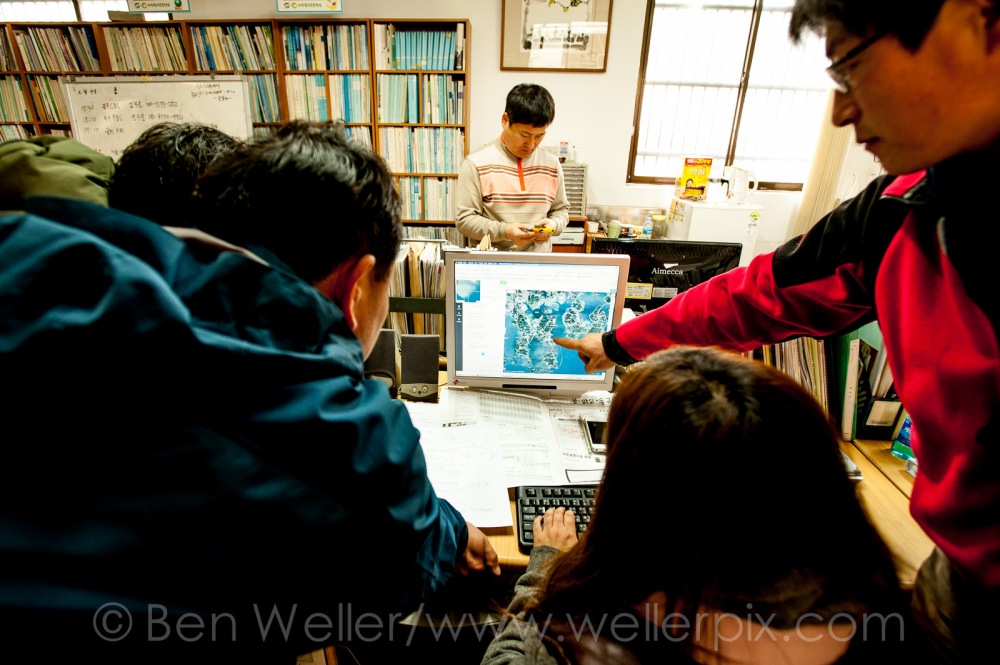 Choi Yeyong, a researcher with the Asian Citizen’s Center for Environment and Health, points to the location of the spill on a map at the Korea Federation for Environmental Movements office in Yeosu. 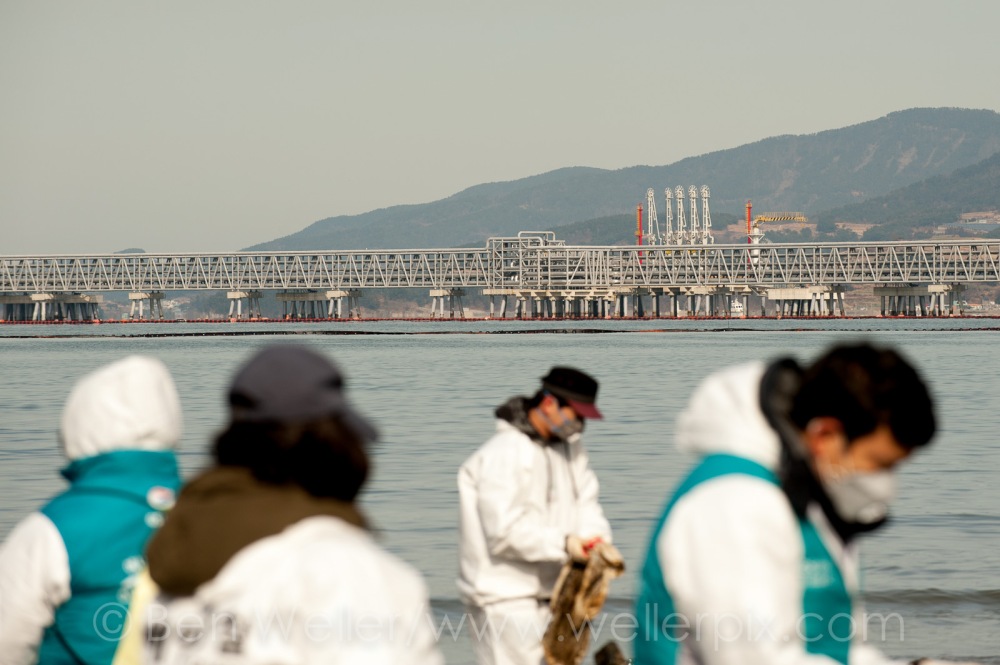 A pipeline similar to the one damaged during the accident.

Like last time, compensation for the affected will be difficult to come by. Much of the fishing in the area is unlicensed, and those families will have a hard time claiming damages. After the building boom of the Yeosu Expo in 2012, an even larger portion of the economy is dependent on tourism. That industry will suffer as well. What is less clear is what this event will mean for GS Caltex and the numerous other large corporations that operate in the area. On Thursday, Feb. 6, South Korean president Park Geun-hye removed the head of the Ministry of Ocean and Fisheries, Yoon Jin-sook, after she suggested that the real victim of the spill was GS Caltex, angering local residents. 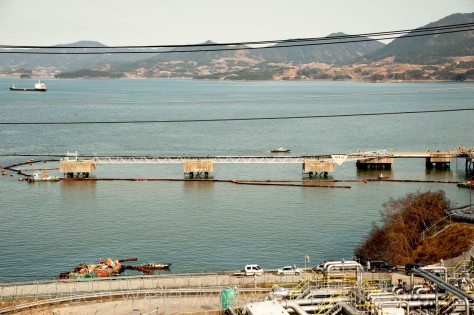 The GS Caltex pipeline damaged in the accident. 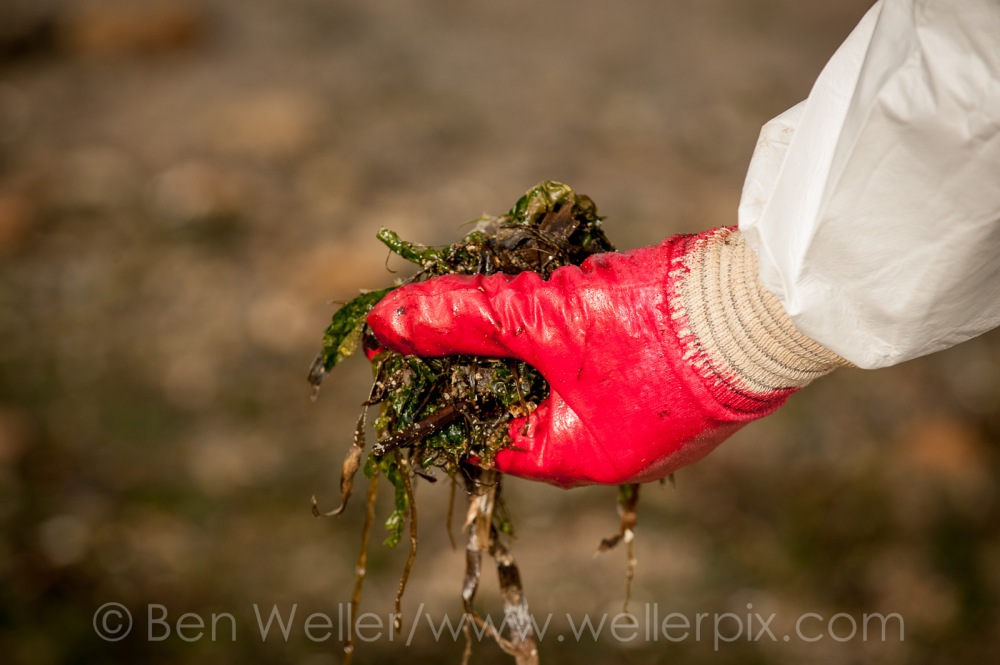 A volunteer collected seaweed contaminated with oil along the Yeosu coastline. 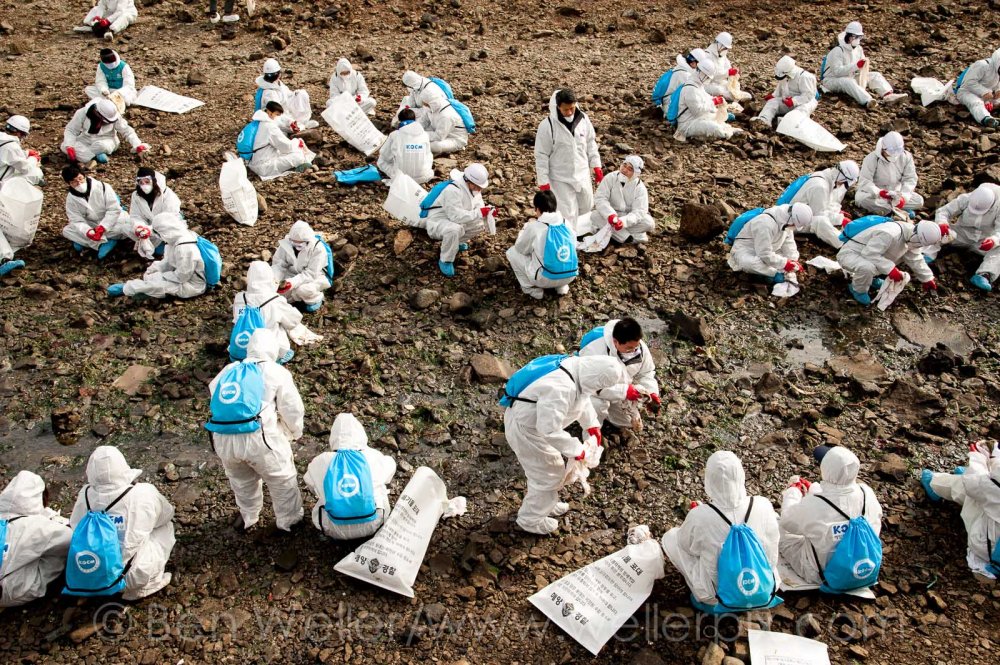 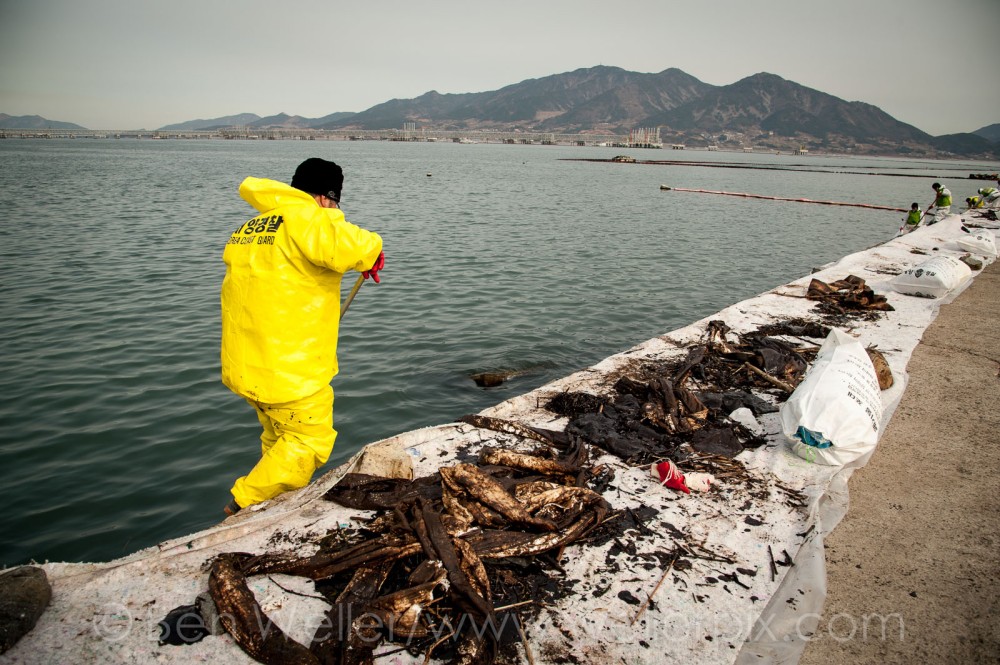 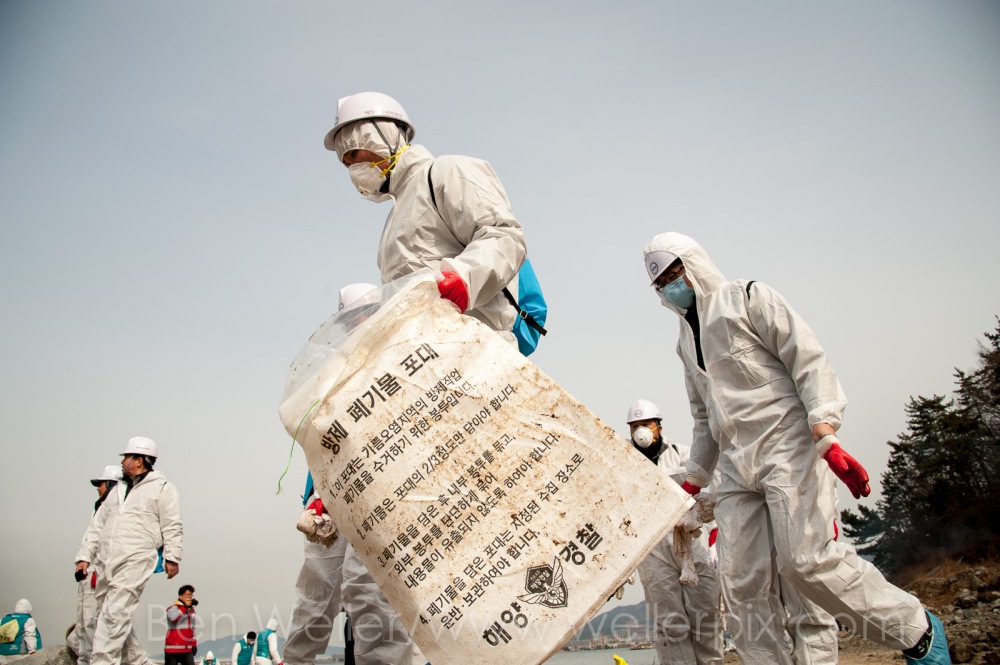 Oil spill clean up in Shindeok.