The Shonan region of Japan encompasses the coastal beaches and cities of Sagami Bay, situated just southwest of Tokyo. A magnet for tourists in the summer, the region’s mild climate attracts surfers and other children of the sun year round. They come for the ocean air, the sunsets, and for the chance, on clear days, to surf in the shadow of Mt. Fuji, towering in the distance.

Already famous in Japan thanks to several popular novels and films, Shonan will soon get global attention. In June, the International Olympic Committee announced that Fujisawa’s Enoshima Yacht Harbor, right in the heart of Shonan, will host sailing events for the 2020 Summer Olympics.

To me, Shonan has become a second home. Aya’s family is from Fujisawa, and we were married in Kamakura. We’re big fans of the Olympics, so to have an event happening right in our backyard is a real treat. Five years out, and we’re already preparing for the influx of Olympian athletes and their fans. The three galleries below will walk you through the areas that make up the central hub of the Shonan region, and will hopefully serve as a guide for any visitors to Sagami Bay. Click on the first picture to view each gallery. 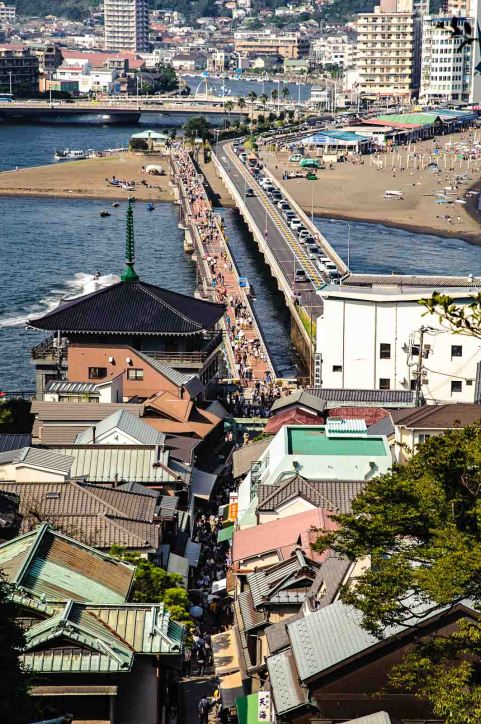 Enoshima Island offers tourists an idyllic walk among parks, shrines, temples, caves, tidal pools, and rock formations. Get your reservations early for a ryokan (traditional Japanese inn) where you can sleep on tatami mats and bathe in hot springs.

The main road leading up the hill of Enoshima Island.

Ryokan along the main street of Enoshima Island.

The hawks at Enoshima are beautiful, but can also be a nuisance. I’ve seen one snatch food out of the hands of a toddler.

The island is also populated by thousands of very tame cats. Between the cats and the hawks, there are likely very few rodents left on the island. 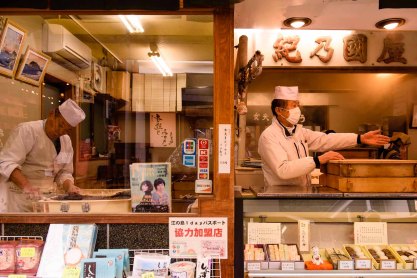 On Enoshima Island, a central street is lined with gift shops and restaurants. Grab some snacks at this dango shop before you hike up through the shrine and over the hill to the Southern Coast.

If you get thirsty on your walk up the hill, there are several restaurants at the top. Enjoy a cold beer and take in the scenery. 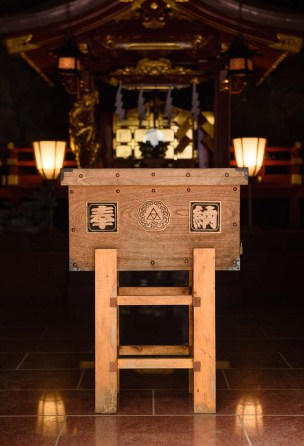 Inside a small shrine on Enoshima 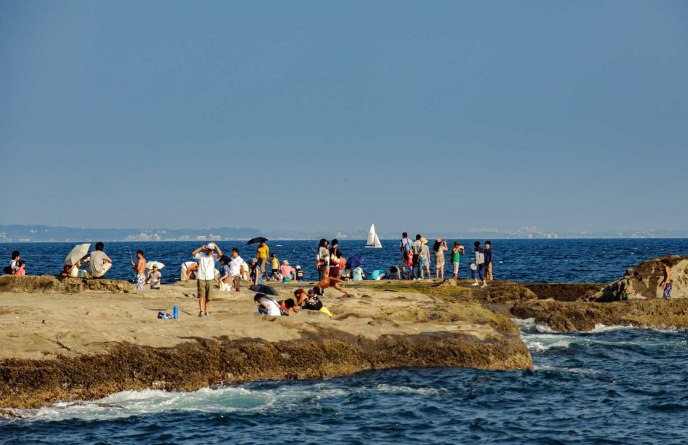 A yacht in Sagami Bay as people walk along the coast of Enoshima Island.

Just west of Enoshima Island is the Kugenuma Beach area, closest to Fujisawa City. I spend a lot of time here with my wife and with my camera. The views of Mt. Fuji are spectacular on clear days, and it’s also one of the most popular surfing spots in Shonan. The waves aren’t massive, but what the beach lacks in intensity, it makes up for in a zen-like calm. The skate park next to the beach channels that zen, and is quite possibly my favorite place to photograph–anywhere.

The beaches of Shonan in Sagami Bay attract surfers year round. The waves are usually pretty gentle, but even the most seasoned surfers will enjoy the area’s natural beauty.

The skate park at Kugenuma beach is my personal favorite. The place kind of encompasses the youth culture of Shonan, and as a photographer, it offers endless possibilities. The park may be closed soon due to budget constraints. The Olympics may either push it out or bring some much needed attention to this gem of the Shonan area. 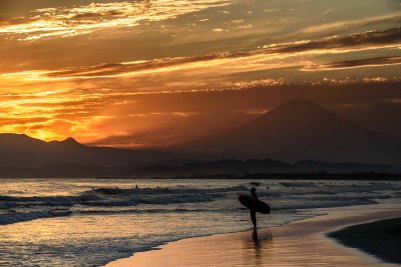 On clear days at Shonan, Mt. Fuji towers in the distance. 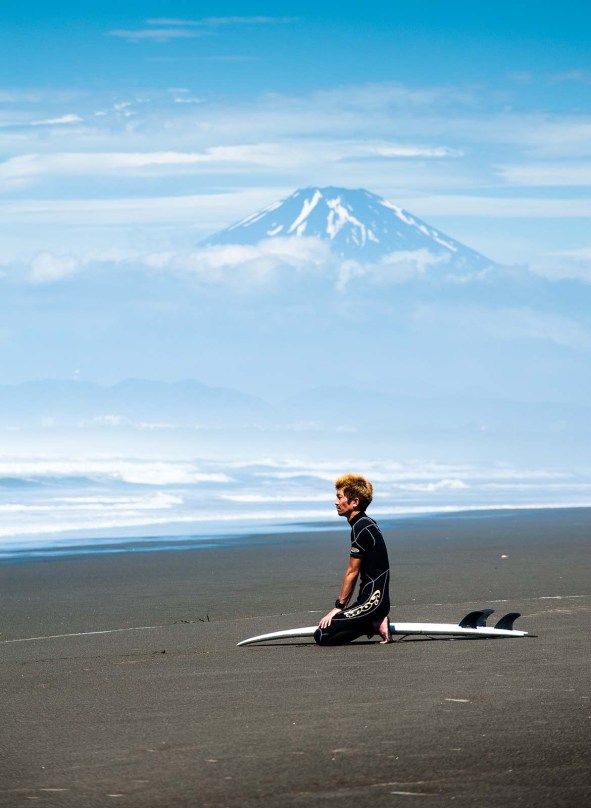 A surfer prepares himself to enter the water at Kugenuma beach in Fujisawa, Japan.

Young surfers prepare to enter the water at Kugenuma Beach in Fujisawa. 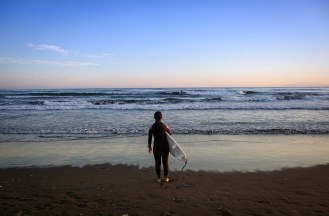 The ocean at dusk.

This small but historically significant city adjacent to Fujisawa is hip and hella fun. If you’re there for a day, visit the city’s famous Kotoku-in Temple in the morning, and walk inside its famous daibutsu (large Buddha statue). Have lunch in town, and then spend the afternoon at Yuigahama Beach. Everything’s within walking distance from Hase Station on the Enoden Line, connecting Kamkura with Fujisawa. 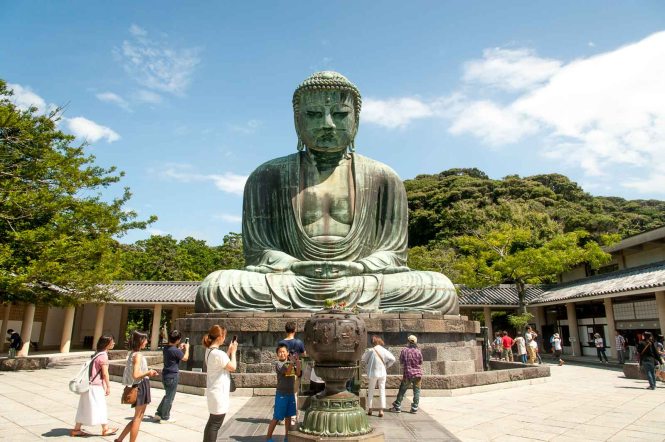 The Daibutsu (giant Buddha) at Kōtoku-in Temple in Kamakura is a short walk from the beach and is one of the most iconic Buddhist structures in Japan. 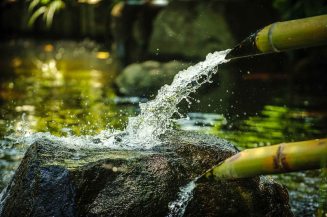 Take a walk through the hillside gardens of Kōtoku-in. 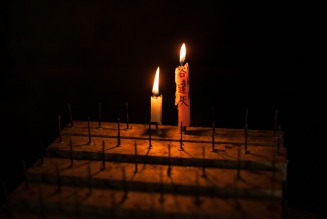 You can cast coins into a Japanese wishing well at Kōtoku-in. 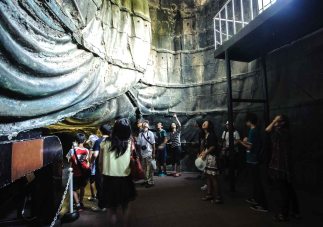 The daibutsu Buddha statue at Kōtoku-in is big enough to walk inside.

People enjoying the sun at Yuigahama Beach in Kamakura, Japan. 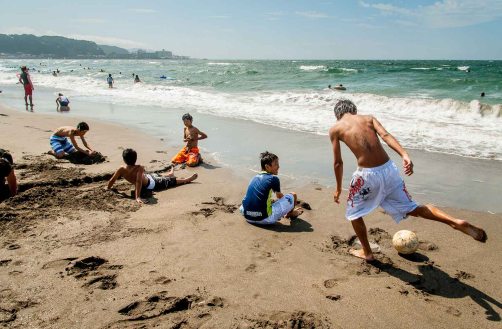 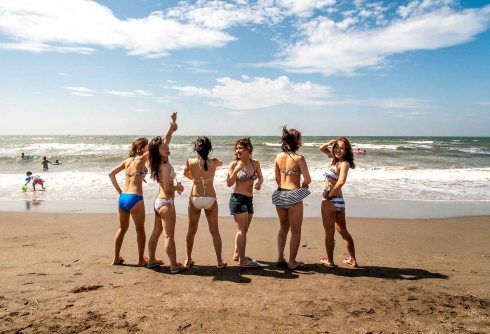 Beachgoers in bikinis pose for a photograph at Yuigahama Beach in Kamakura. 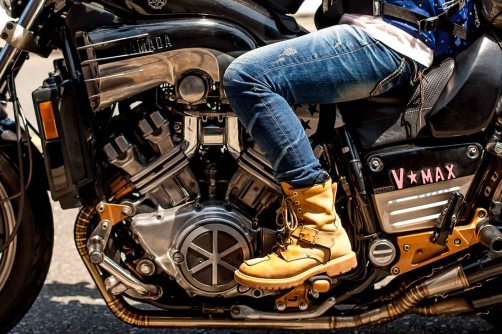 Kamakura, like the rest of Shonan, pulses with a kind of bohemian, counterculture vibe.

Transportation around the area can be tricky, so research beforehand. The Enoden train line connects Kamakura to Fujisawa Station, with access to Tokyo. 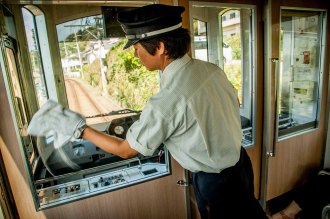 A train conductor cleans a window on the Enoden train. 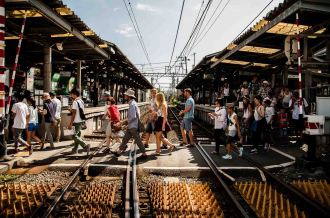 These are just a few of the places to go, and things to do, while you’re in Japan for the 2020 Summer Olympics. I’ll continue to add more tips to the blog as the Games approach. Aya pointed out that I need some more food pictures, so our next trip to Shonan, in November, will be food-focused, with a blog post to follow.

Ben Weller is a photographer based in Nagoya, Japan. All images by Ben Weller / www.wellerpix.com © 2015